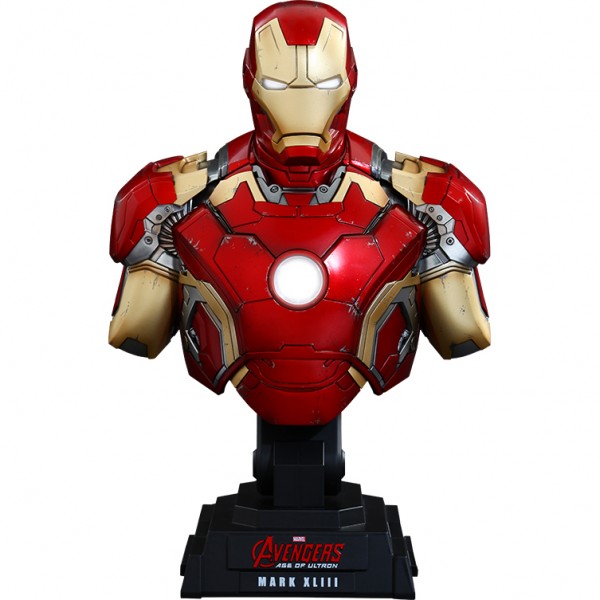 This piece measures approximately 9″ tall. It also features a nameplate on the base featuring the movie logo. 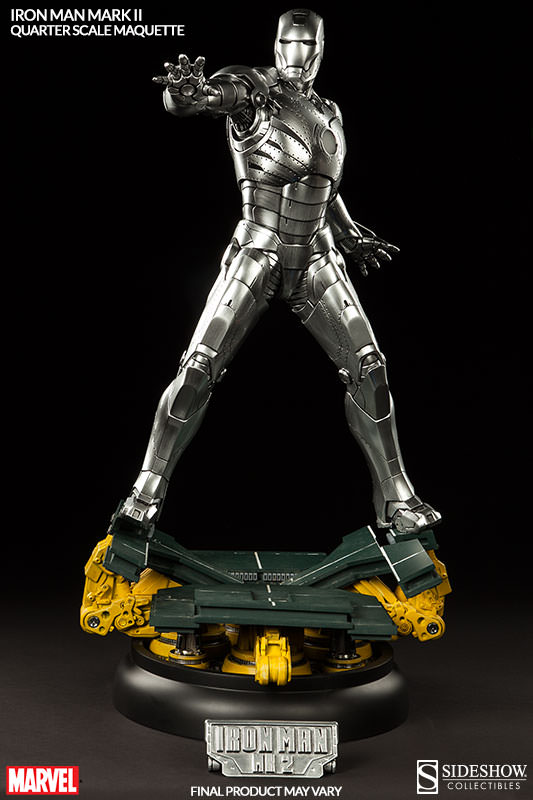 Sideshow Collectibles unveils Tony Stark’s second version of the Iron Man armor. First appearing in the first Iron Man film in 2008, this version of the armor helped pave the way for the many incredible suits to come!

Standing an invincible 26″ tall, this maquette features a gantry base that keeps the armor in ready position. The silver armor is crafted with premium grade polystone, finished with a high gloss metallic paint application, and there are brilliant light-up features in the eyes, chest and palm repulsors.

Pre-order the Iron Man Mark II today for your own Hall of Armor! 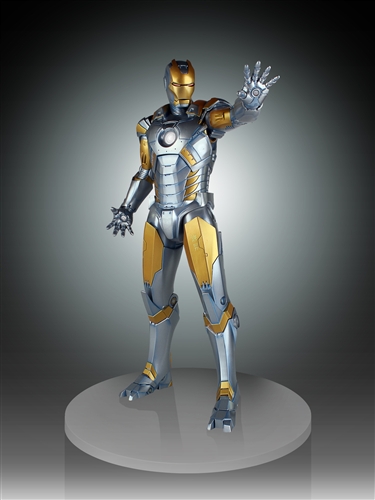 From Marvel and artist Hajime Sorayama, this Iron Man statue is a stunning enhancement of the hero’s famous armor. This vibrant design was featured on the variant cover of Iron Man #18.

This sleek statue stands 18.5″ inches tall and features an illumination effect throughout the body for a striking display 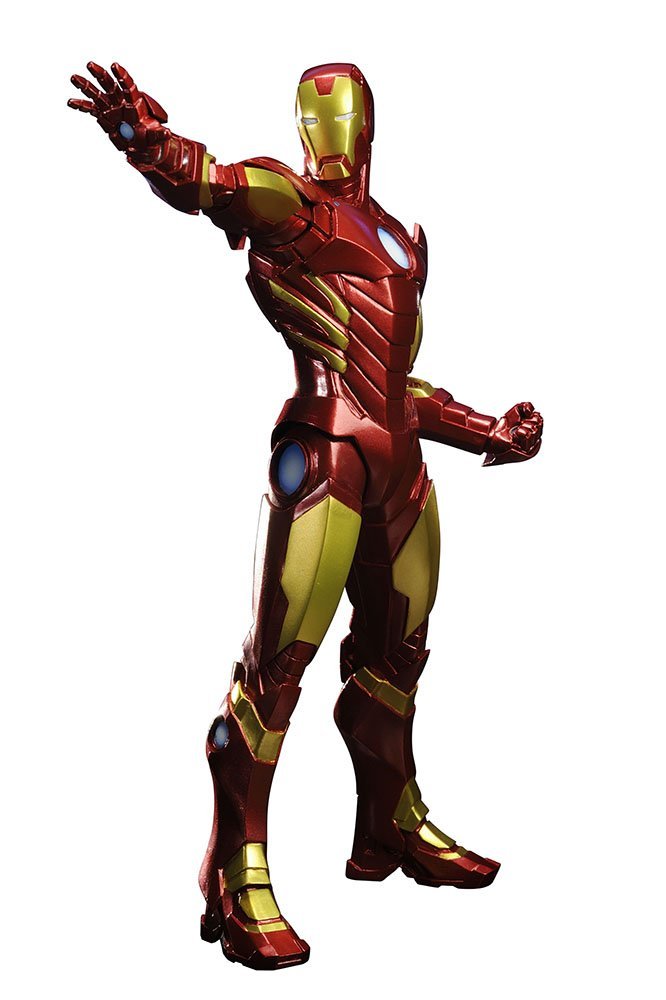 Iron Man – the technological genius of the Avengers — joins the ranks of the Avengers Now ArtFX+ line from Kotobukiya. This is the classic red and gold hot rod armor Iron Man fans know best.

Based on the design artwork by Adi Granov, this Iron Man statue stands over 20 cm(8 inches) tall and is 1/10 scale.

This statue will be in stock February 2015.

The black and gold version of this statue can be found here. 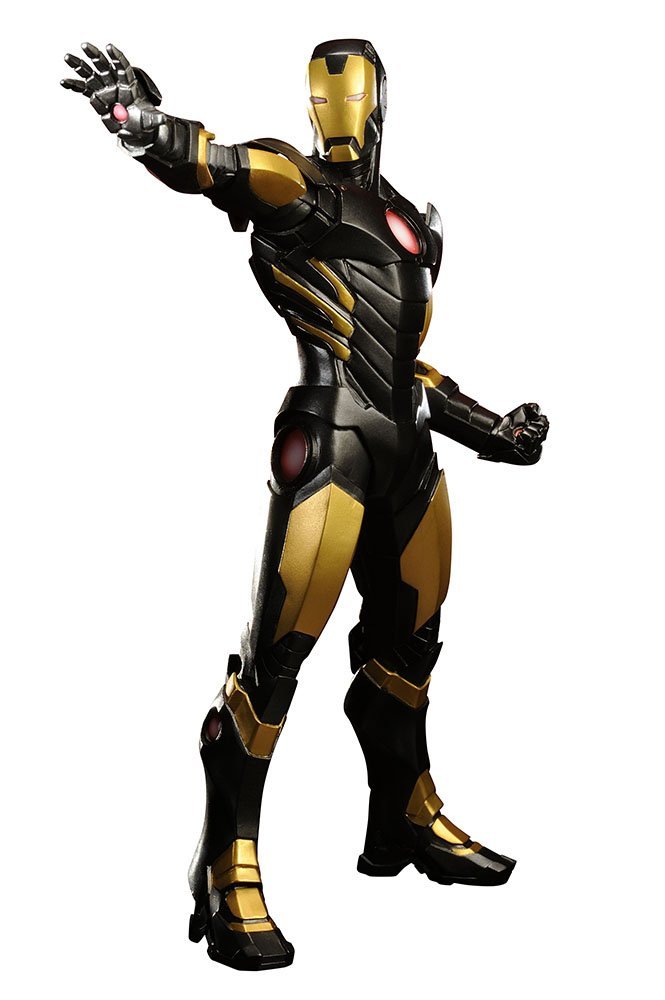 The Marvel Now! Version of the armor-clad Avenger, Iron Man! This statue is based on the artwork of Adi Granov and commissioned by Kotobukiya. The bold black and gold colors adapt Iron Man’s AVENGERS NOW appearance. The statue stands over 20cm (8 inch) tall in 1/10 scale.

This statue can be displayed individually or alongside his fellow Avengers which are also available as ARTFX+ statues by Kotobukiya!

From the the blockbuster hit, IRON MAN 3, comes the IRON PATRIOT Statue!

In the comics, the Iron Patriot first appeared in Dark Avengers #1 and was none other than Norman Osborn, the arch-enemy of Spider-Man. Sometime later, the armor came to be worn by James Rhodes. The armor was also worn by James Rhodes in the IRON MAN 3 film.

This statue is digitally sculpted by Gentle Giant Ltd. They used the original CGI data from the IRON MAN 3 film to accurately replicate the fantastic look of this armored hero. The mid-action pose brings to light the many points of illumination, which includes the arc reactor on the chest as well as the repulsor gloves. This limited edition statue is hand-painted and each is numbered accompanied with a certificate of authenticity. 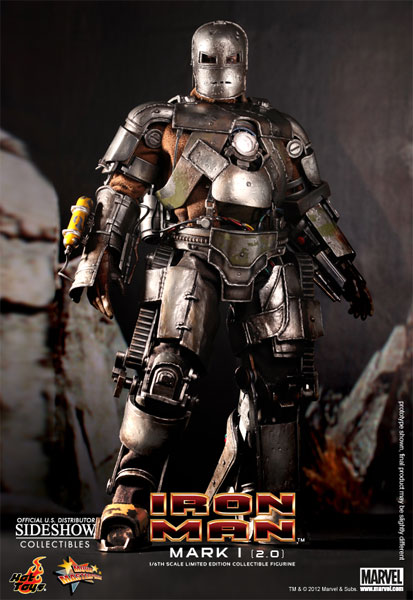 Inspired by the first Iron Man movie, this beautiful figure is intrically detailed and captures the lo/hi-tech version of Tony Stark’s first Iron Man armor perfectly! Take off the helmet, and their is a fantastic likeness to the actor that brought Stark to life, Robert Downey, Jr.!